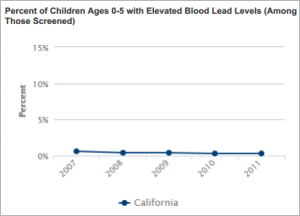 This is because of several factors, including the evolution of knowledge regarding the risk of harm and the prevailing pathways of exposure to children; long-standing regulatory efforts and prevention programs; the establishment and enforcement of guidelines for maintaining existing lead-based paint; and the removal of lead from the environment.

Evolution of knowledge: While the use of residential lead-based paint peaked in the 1920s, health risks to children from chipping and peeling interior lead paint were not suspected until around 1950. At this time, the former manufacturers of lead-based paint did the right thing. They funded “no strings attached” research that was published, and they voluntarily withdrew lead-based interior paint decades ahead of federal government action. Today’s concerns regarding low asymptomatic blood lead levels were only raised through computer-based epidemiological studies beginning in the late 1970s and 1980s. Modern concerns about household lead dust as a pathway for exposure were also not discovered until the 1970s. As this knowledge evolved, lead was gradually banned from many products including gasoline, paint, plumbing, and solder.

Long-standing prevention programs: California’s Childhood Lead Poisoning Prevention Program (CLPPP), including its emphasis on education and maintenance, has contributed to a dramatic reduction in blood lead levels in children. CLPPP was established more than twenty years ago and is funded by industries that historically contributed to the presence of lead in the environment, including gasoline companies, lead paint manufacturers, and airborne emitters. California calls the continuing decline in children’s blood lead levels “a public health success.”

Maintenance guidelines and enforcement: Good maintenance is the best way to deal with existing lead paint. Most lead paint is safely buried under layers of non-lead paint.  If not disturbed, that lead paint is not a hazard. Every federal, state and local law on the books puts the obligation on property owners to prevent or abate lead-based paint hazards. Enforcement against noncompliant owners includes loss of tax deductions and criminal penalties.

Washing out over time: Scientists have observed a gradual “washing out” of lead from the environment. Children are exposed to far fewer sources of lead today than they were in the past because of the phase out of lead in a variety of products. Children’s blood lead levels plummeted after a lead additive, emitted into the air and soil in auto exhaust, was phased out of gasoline and lead solder was removed from food cans.

More information on blood lead levels in California can be found on the website for the California Childhood Lead Poisoning Prevention Branch.